Just this week I was digging around trying to find something I wanted to take in to work and I came across a book that I wrote and illustrated for a unit I did in english back in 1994 (I was floored when I realised that was 20 years ago, I’m not that old am I?!?!).  The unit was ‘Children’s Stories’ and from the assessment sheet that was tucked in the back of the spiral bound book, there were two parts of the assessment.

Part 1 involved research and an oral.  It looks as though I chose Maureen Stewart to research and I used at least three of her books in my presentation.  The assessment card said that I received a B-. I’ve never been great at presentations so that’s not too bad for me.

Part 2 was the creation of a children’s book (cover picture above).  I received an A+ for that component which is most likely why that book is still currently in existence.

I really enjoy looking back over the stories and poems I wrote as a kid.  So I’m very glad that my mum kept some of them and they didn’t all end up being thrown out.

I thought I’d share some observations and things I can remember about putting this book together.

If I ever get brave enough, I might scan the whole thing and post it on here, but for now I’ll just put up a picture of the cover and the assessment notes. 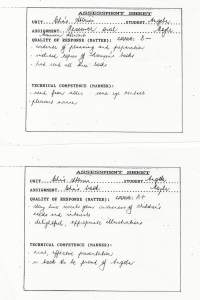